Check out this news clip from our friends at KVUE about our annual Summer Pageant in the Park on Saturday, June 22. 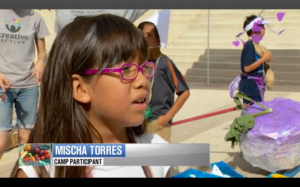 More than 100 children joined us as we paraded through the Downtown Farmers’ Market wearing costumes and carrying puppets that depicted all the kids had learned about “How Our Food Grows.”

The parade is the culmination of a short summer camp for children who might not otherwise get to have a camp experience. “Even though we didn’t have as many campers as we would have liked due to funding issues, the kids who did participate got a lot out of it,” says Karen LaShelle, executive director of Creative Action.

Learn more about Creative Action Summer Camps, now through the end of August at several locations around Austin.

Taking care of each other and our world!

Each summer, Creative Action holds a parade that is an end of camp celebration for…

This year, Big Medium is combining both the East and West Austin Studio Tours into…