Each summer, Creative Action holds a parade that is an end of camp celebration for some amazing kids in Austin. This year, the theme was People Power! Campers learned about people in the community that help 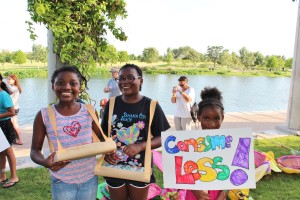 others like firefighters, police officers, doctors, teachers and more. They also explored how they can be a positive source for change in their own communities.

The environment and how we take better care of the world we live in was also a theme in the camp. Campers discovered ways to protect the earth and beautify their communities. They created puppets, musical instruments, and other visual art from recycled materials.

At the end of camp, the campers and their parents were invited to a picnic at Mueller Lake. Everyone enjoyed sandwiches and healthy snacks. Then, they all gathered for the People Power! Parade around the lake. Several members of the community joined in as the parade circled the park. Some of the students even shot the end of their film at the parade. Students showed off the creations they made in camp and carried signs and banners that encouraged others to take care of each other and our world.

Thank you to everyone who attended! You can view all the photos from the event on our Flickr page.

We’ve Got the Pie, Games, and Crafts. Now All We Need Is You!

by Mitch Harris, Community Relations Intern There are few things I love more than pie.…

Volunteering at Austin Trail of Lights