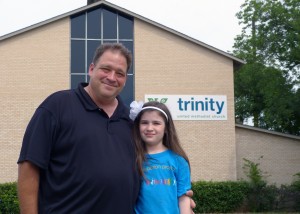 Bella and her dad, Mark Negro

One of the most devoted campers; Bella Negro has been going to Creative Action (formerly Theatre Action Project) Camps for four years to date and attended all eight weeks of camp this past summer.

Asked which week was her favorite, Bella answered: “All of them!” When asked why she liked camps, Bella said with a smile, “It’s because it has acting and filming and I love doing that.”

An avid actress, Bella has come a long way since starting at summer camp four years ago. Her father, Mark Negro told us “She has no intimidation now. This has really added to her confidence. It’s really funny because she likes to be in front of people speaking, singing, or acting. I think the program here helps the creativity, gets them seeing things in a different way, and one of the great things is it develops teamwork and then confidence” When asked about her favorite part of film-making, Bella said “I love everything because I love to be on stage.”

Green screening, or chroma keying, is a video effects technique used to superimpose one image onto another, often used for news reporters on TV or in film. During Lights, Camera, Action, Bella acted as a dog named Spot in a group that made the short film The Day it Rained Bowling Balls with the help of Teaching Artist Mitch Bowman. 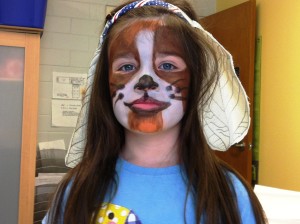 Bella’s love for acting continues, as she has also participated in talent shows in front of about 100 people, and classes at ZACH Scott Theatre. Mark reflected on that by saying “She did that because of how she really fell in love with acting here. And it was after one of her shorter camps during the school year, and she begged us and so we went ahead and found her a class at ZACH Scott Theatre and she loved it.”

To sum up Bella’s experience at Creative Action Camps, she exclaimed “It’s awesome! It’s the best camp ever.” From a parent’s point of view, Mark said, “The people here are incredibly committed. It’s a real responsibility to trust, when you leave your child with somebody for a whole week. And you want somebody to help develop her, and we feel like we’re part of the family here.”

To see a video on green screen technique:

A social media campaign to enable social change created by youth for youth. (Let that sink in.) That’s the root foundation of the campaign #UnmuteMePlz, which launched on Saturday, June 26th.

Last year tested many of us - from teachers, students, and parents alike. Our staff…