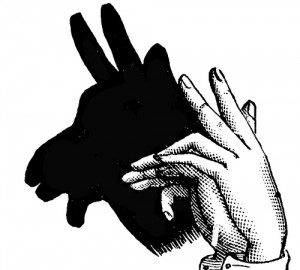 I have always been intrigued by shadow. Shadow reminds me of the old monster movies from the fifties. The shadow always appears first before you see the monster. I have seen many live productions use shadow effects and I have used them as well. The imagination creates entire worlds with one shadow effect. I once saw a one-man Shakespeare performance of “The Tempest” where one actor used a flashlight on himself to create some amazing effects. By zooming in and pulling away with the flashlight the effect of growing smaller and bigger is achieved easily. 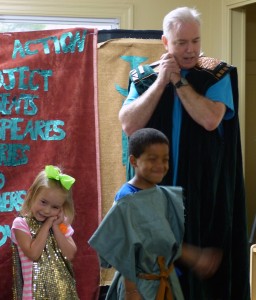 This semester I will be creating shadow puppet shows with my students. We will be studying Greek Mythology. I look forward to seeing the shadow versions of the Giant Cyclops, The Trojan Horse as well as Poseidon, Zeus and Athena. The best part of teaching shadow puppets for Creative Action is that anyone with a flashlight and some cardboard can easily create a fantasy world. So parents, hide your flashlights unless you want a creative child to take action!

One of the most devoted campers; Bella Negro has been going to Creative Action (formerly…

“I want to be my students’ ally.” Ana Laura Treviño has been part of Creative…