This past spring, Creative Action undertook an exciting new project working with high school students to research the health and legal consequences of vaping and to synthesize that acquired knowledge into socially relevant memes for their peers.

The project was made possibly by Community Arts Partner funds through Austin ISD’s Creative Learning Initiative, which connected Creative Action with Anderson High School to conceive of a project to address a high occurrence of vaping at the school. A public health official had already presented to parents about the problem, but Anderson High School’s principal recognized that charts and graphs and monotone presentations might not make a real impression on students.

Over the course of six sessions with different class periods of a communications class, students worked with Teaching Artist Victoria Prescott to research potential health and legal consequences of vaping, the language of memes, and the way vaping is marketed to young people.

Though Victoria Prescott is a longtime Creative Action team member, she had little experience working with teenagers and quickly needed to devise strategies to capture their attention and enthusiasm.

“But it seemed like a lot of times — I was like this in high school — everyone was really independent. I wanted to respect that,” says Victoria.

Part of that process meant allowing teens to create their own research questions and paths of inquiry. Victoria didn’t come into the classroom like the DARE officers she remembers from her own high school experience; the idea of creating an “anti-vaping” campaign was never explicit. Students were encouraged to simply do the research and voice their opinions. 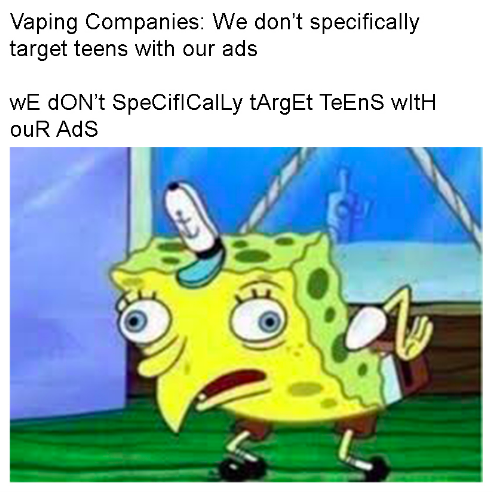 “We tried to be really clear that telling young people what they should and shouldn’t do — that’s generally not how we work and that’s something we really tried to avoid,” says School-Based Programs Director Natalie Goodnow who created the curriculum for the program.

“We just wanted them to learn more and then feel more empowered in the decisions they’re making and how they’re able to educate their peers. We came into it as, ‘We’re just going to research and talk about it and you get to share what you think is important.’”

To begin, students played a “Role on the Wall” exercise where they imagined the perspective of a teen who vapes: what are they thinking? What are they feeling? What messages are they hearing and what’s influencing them? 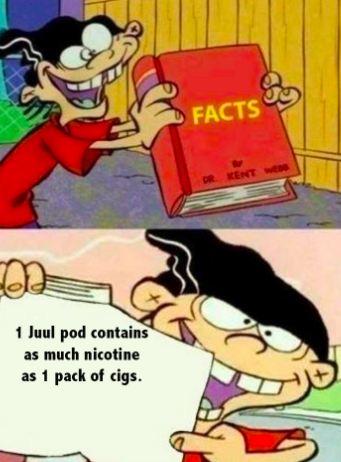 Victoria noticed a lot of engagement with this game as students were able to share their viewpoints without fear of judgement. The classes also discussed what makes memes powerful, effective, and engaging resources and then began the process of creating their own memes to winnow the information they were learning into bite size forms of communication. Throughout the process, they were able to bounce ideas off of their classmates and receive feedback on the relatability or funniness of their memes. Many of the students cited meme making as the most fun part of experience. 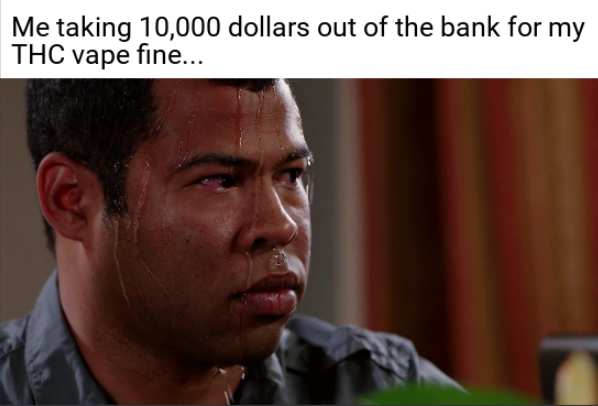 Victoria feels that the project’s biggest impact is giving the students tools to “synthesize important information in an accessible form. It’s not preachy. It’s not shameful. It’s just like, this is a fact. You can’t deny this. Then learning to make a decision from that information.”

Now that the memes have been created (check them out throughout this post!), Anderson High School plans to share them with the general student body to educate more teens about vaping in a funny, relatable way.

Community Arts Partner funds are available through the Creative Learning Initiative. These funds can be used to bring Creative Action to your school. To learn more visit austinisd.org/cli or contact us.

While exciting and full of opportunity, back-to-school season can also be a stressor for young…

Do you live near LL Campbell Elementary or the Alamo Rec Center? If so, you…

6 Low-No Cost Ways to be a Philanthropist

You don't need excessive wealth to be a philanthropist. The true core of giving is in the desire to promote the welfare of others.
Back To Top
X