On Tuesday, November 17th, Creative Action was honored to have our Executive Director, Karen LaShelle, named Nonprofit Executive of the Year at Mission Capital‘s Party for Good. This award 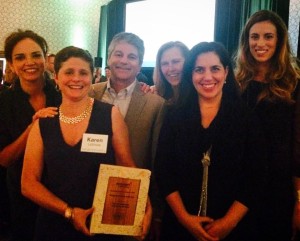 is presented to a nonprofit staff leader (CEO, Executive Director or equivalent) whose achievements have resulted in significant progress toward resolving a critical community issue. Recognized by peers as a leader in the sector, he/she demonstrates excellence in leadership and management, and inspires others to achieve meaningful, measurable and sustainable results.

Karen began working at Creative Action as a volunteer in 2003 and has helped the organization grow from serving 800 young people to its current reach. In addition to the 2015 Mission Capital Executive Director of the Year, Karen is a member of the 2010 Leadership Austin Essential Class, won the “Austin Under 40” Arts and Culture award in 2011, and was a 2012 and 2013 finalist for the Ernst & Young Social Entrepreneur of the Year. Karen is a member of the 2015 Community Arts Education Leadership Institute through the National Guild for Community Arts Education, where she is also an Ambassador for the state of Texas. Karen was a member of the Create Austin Cultural Planning Task Force and sits on the Steering Committee for MINDPOP. Previous positions: Assistant to the Artistic Director and Outreach Associate at Northlight Theatre (Chicago), Co-director of Redmoon Theatre’s award winning program Dramagirls (Chicago), Arts Specialist for Interfaith Neighbors Girlspace (New York City). Karen holds a BFA from Illinois Wesleyan University and an MA in Community Based Arts from New York University.

Congratulations to Karen! Honor Karen and her dedicated work at Creative Action with a donation.

Get your Big Hair tickets here!

With Big Hair Country Fair nearly one week away, it's time you found the perfect look to…

The Creative Action youth ensemble, Changing Lives, will have its final performance of the school…