Guest post by Free Minds. The Free Minds Project provides Austin-area adults living on limited incomes with a chance to explore their intellectual potential. Creative Action provides programming for the children of those adults to remove barriers like child care. 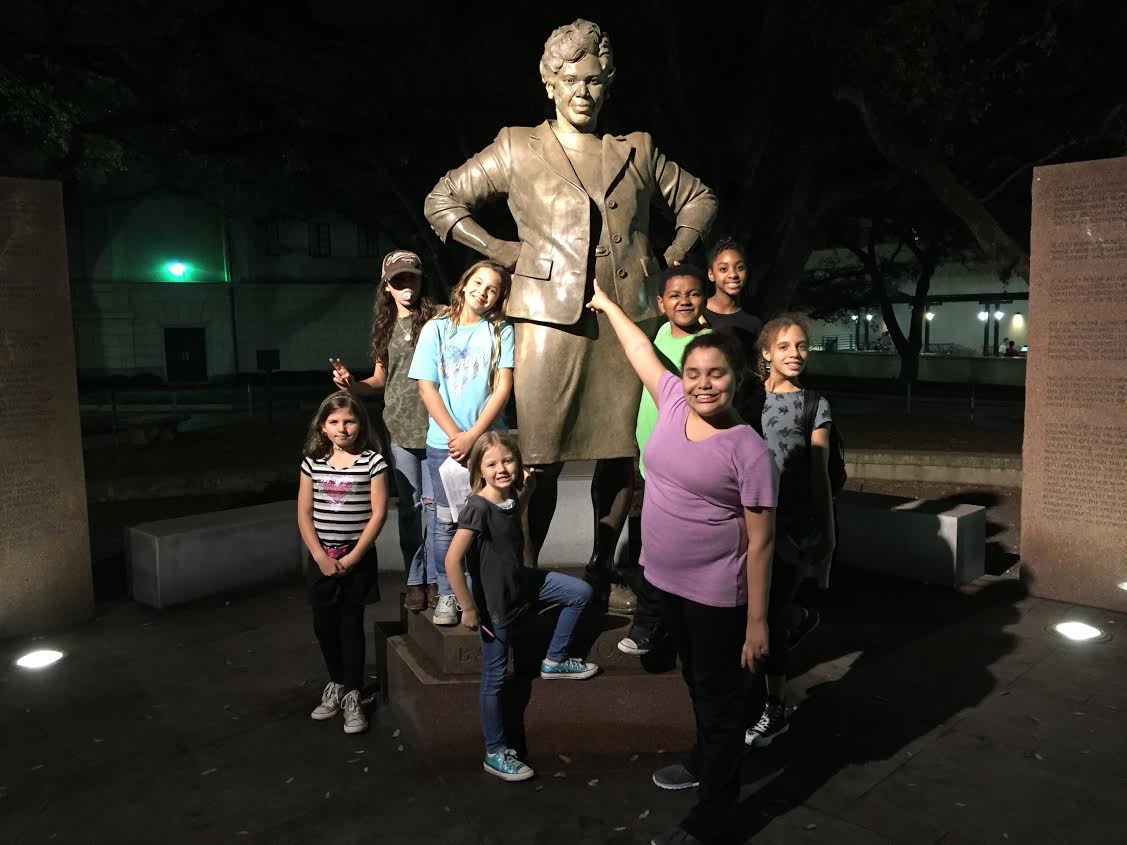 While Free Minds students analyzed the photographic portraits of Frederick Douglass last week, the younger generation was having a similar conversation down the hall, via an award-winning picture book.

As a partner that offers art-focused education for the children of Free Minds students, Creative Action builds bridges between generations of Free Minds participants. This year, the focus has been driven by world events our cohort of young ones have watched unfold around them.

“I’ve been so proud of the young voices that have risen up from Parkland, Florida, and we have powerful young voices right here, too,” said Freddy Carnes, the Creative Action teaching artist who leads the group each Monday and Thursday evening. Some themes were planned, says Carnes, but many of the subjects they’ve tackled this year came about by asking the students what they wanted to talk about. Their passion turned outward.

In their most recent project, kids collaborated to write “Amyaah, the Dreamer,” a 36-line song about a Cuban woman who moved to LA. From start to finish, the children created Amyaah’s story, empathizing with her struggles and dreams and picturing themselves in her shoes. “Amyaah wanted her daughters to be safe, to have clothes, food, shelter and a career. She wanted them to feel love and happiness, to feel brave and not to fear,” reads the song’s second stanza.

“You don’t get 36 lines if the subject doesn’t mean anything to you. They’re compassionate about these issues,” said Freddy. “It’s easy to write a song about a puppy or a shark…but you realize that third graders are capable of this kind of thought.”

The students have many reasons to feel connected to the plight of the Dreamers. Vivalyn Jones, Creative Action volunteer, is one of them. Having emigrated from Jamaica years ago, Vivalyn raised two generations in this country, and has shared her story with the group.

Empathy emanates from this little M Station classroom. Looking forward, the group hopes to record their song, and maybe even create a music video. The kids have already proven they’re capable of big ideas, critical thinking, and compassion, just like their parents down the hall.

This year, Big Medium is combining both the East and West Austin Studio Tours into…

Teaming Up for the New School Year

by Sharon Chin, Texas Tower PR Hi there! It has been a while since a…

We’d like you to meet Ms. Betty Ussery. She is an 87-year-old pillar of East…