This week, the Changing Lives Youth Theatre Ensemble will begin touring “Showmance,” an original play they wrote to explore the topic of jealousy in relationships. A collaboration between Creative Action and Safe’s Expect Respect program, the Changing Lives Ensemble creates plays like “Showmance” each year to engage middle schoolers across Austin in discussion of issues related to relationships and abuse.

The ensemble begins each school year with a blank slate, choosing a topic relevant to middle school relationships through an in-depth research process of interviews with young students, writing prompts, improv exercises, and ensemble discussions.

As the Changing Lives teens began moving through this process in late 2019, they recognized the topic of jealousy coming up again and again. In one exercise, Changing Lives members created tableaus and acted out stories as a generative process; every group, independently of one another, focused on jealousy in some way. Each of the teens Creative Action spoke to said they had experienced jealousy personally.

“Showmance,” an Exploration of Jealousy

The show the cast eventually ended up with, “Showmance,” follows three different storylines to examine jealousy and its aftermath in a variety of contexts. One plot follows a relationship in which the boyfriend is jealous over a kiss his girlfriend gives in a play. Another student must deal with the jealousy she feels as her first-ever girlfriend maintains a relationship with her ex. Finally, a best friend must contend with jealousy when the other members of her formally tight-knit friend group begin new relationships. 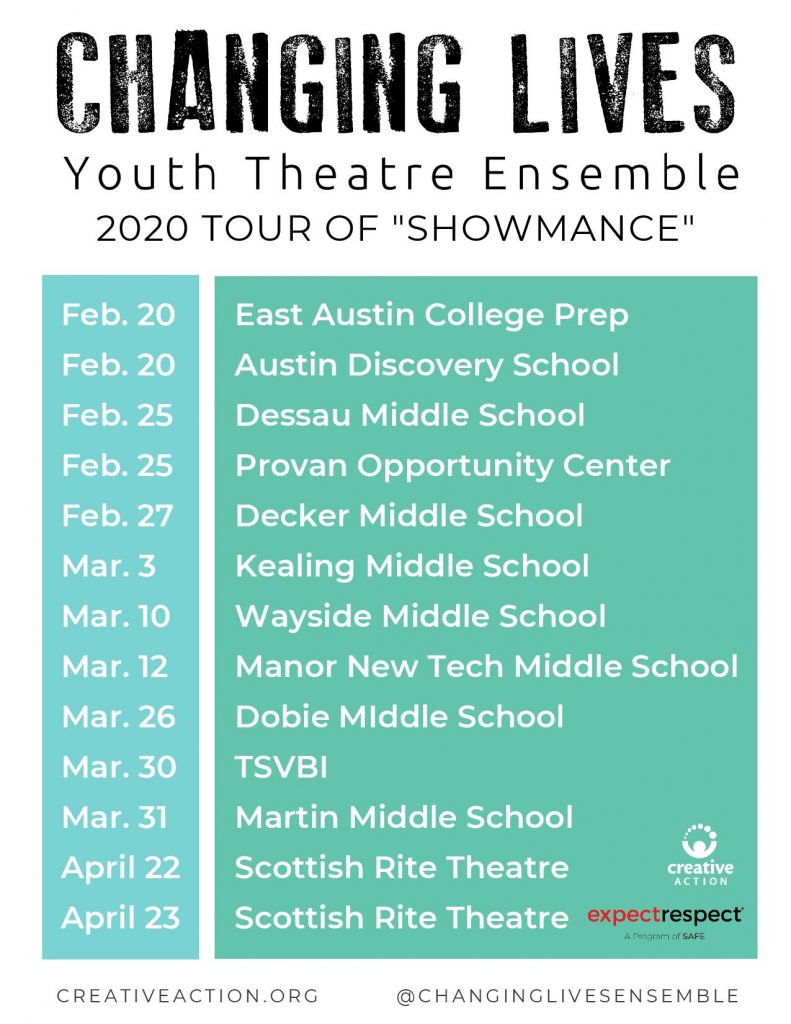 By telling three stories, the play offers an exploration of jealousy that can resonate with most spectators, whether they are gay, straight, or not dating. Showing three different manifestations of jealousy also helps illuminate which reactions to jealous emotions are reasonable and which reactions veer into an unhealthy place.

“While the audience might think, ‘Oh, it’s kind of natural to feel some sort of way when you see that your girlfriend is best friends with her ex,’ the play shows how it can escalate. That it turns from a normal behavior, you could say, to a more unhealthy behavior, like a stalking, obsessive kind of behavior,” says Angela Lopez, a Changing Lives Peer Leader and member of the ensemble’s Youth Prevention Team.

Jealousy as a Red Flag Behavior

By showing different ways of expressing emotion, including healthy and unhealthy ways, the play helps middle school audiences recognize jealousy as a possible red flag behavior that can lead to more harmful actions.

“I think we show that some types of jealousies can be resolved and some things you just need to communicate about it. But then sometimes, it just goes so far and you don’t feel safe in a relationship or you don’t feel like your needs are being met or that you’re trusted,” says Fluker.

In the latter case, the Changing Lives cast hopes middle schoolers understand that it is best to walk away from the relationship.

At the end of each play, Changing Lives hosts a talkback between the cast and audience members about the play. Amber, Angela, and Eliza hope that after seeing “Showmance,” middle schoolers will be able to engage in a discussion about the nuance of jealousy in a relationship, and will be able to more confidently identify when jealousy passes from a natural emotion to an unhealthy one.

Check out more resources on relationships and abuse by visiting our Changing Lives partner, the Expect Respect Program from SAFE.

As a kid, Larissa Stephens was into two things: art class and comic books. The…

My Semester at Creative Action

For the past four months, I served as the Community Relations Intern at Creative Action…